Signatories to the 2015 Paris Agreement should be well on their way to energy transition by now—and some are. The European Union, for one (or many) is close to meeting its targets. But others, like the countries of Latin America, lag behind, as they struggle to square the local need for economic development with the global necessity of low-carbon energy. The reasons for the lag are complex. But the need to keep pace is dire.

Thus, with Brazil’s scathing reception in France over the Amazon forest fires, Argentina’s surprising primary election results, Mexico’s AMLO, and Venezuela’s political-economic quagmire as a backdrop, global energy industry leaders and experts gathered in Madrid from September 4 to 6 to discuss climate change and the importance of renewables in the European and Latin American energy mix.

The European Union is at the forefront of global decarbonization efforts. For example, Spain’s national energy transition plan targets zero-carbon status by 2050, with specific steps slated for 2020-2030, including a 34% renewable allocation in the energy mix—equal to 57 megawatts—with faster growth in solar than in wind to reach a balance. Solar and wind energy are already some of the cheapest ways to produce clean power. In the Iberian market, wind energy generation recently auctioned at 20 cents per megawatt/hour. And the country also plans to improve access to electric mobility and reduce its dependence on energy imports (the country currently imports 70% of its energy). Spain is also set to unveil a flexible multi-annual calendar for renewable energy auctions, a key step in market sustainability. The plan is designed to create a level playing field for innovation and a positive regulatory environment to support private sector investments.

And there are already plenty of partnerships and cooperative efforts that bridge the EU and Latin America, as well. Italy’s Enel, a multinational electricity generation and distribution company, is building a solar plant in Brazil. Spain’s Iberdrola has wind farms in Mexico. BP has partnered with Bunge in Brazil to expand its biofuels and low-carbon fuel portfolio. The Latin American countries themselves have also begun to focus on what works best for them. As Thiago Barral Ferreira, CEO of Empresa de Perquisa Energetica (EPE), a research and planning entity with Brazil’s Ministry of Mines and Energy, pointed out during a panel discussion at the conference, the region is diverse and energy-rich, and can support a variety of clean energy strategies. Chile and Brazil are investing in solar. Argentina and Uruguay are focused on wind. Brazil and Argentina continue to pursue the idea of investing in liquefied natural gas (LNG). Nicholas Lawson, Low Carbon Strategy Director for BP pointed out that biofuels offer plenty of opportunities, as well. Nonetheless, Latin America still relies heavily on fossil fuels, not only as consumers, but also as producers. What will it take to get those countries to the next level? 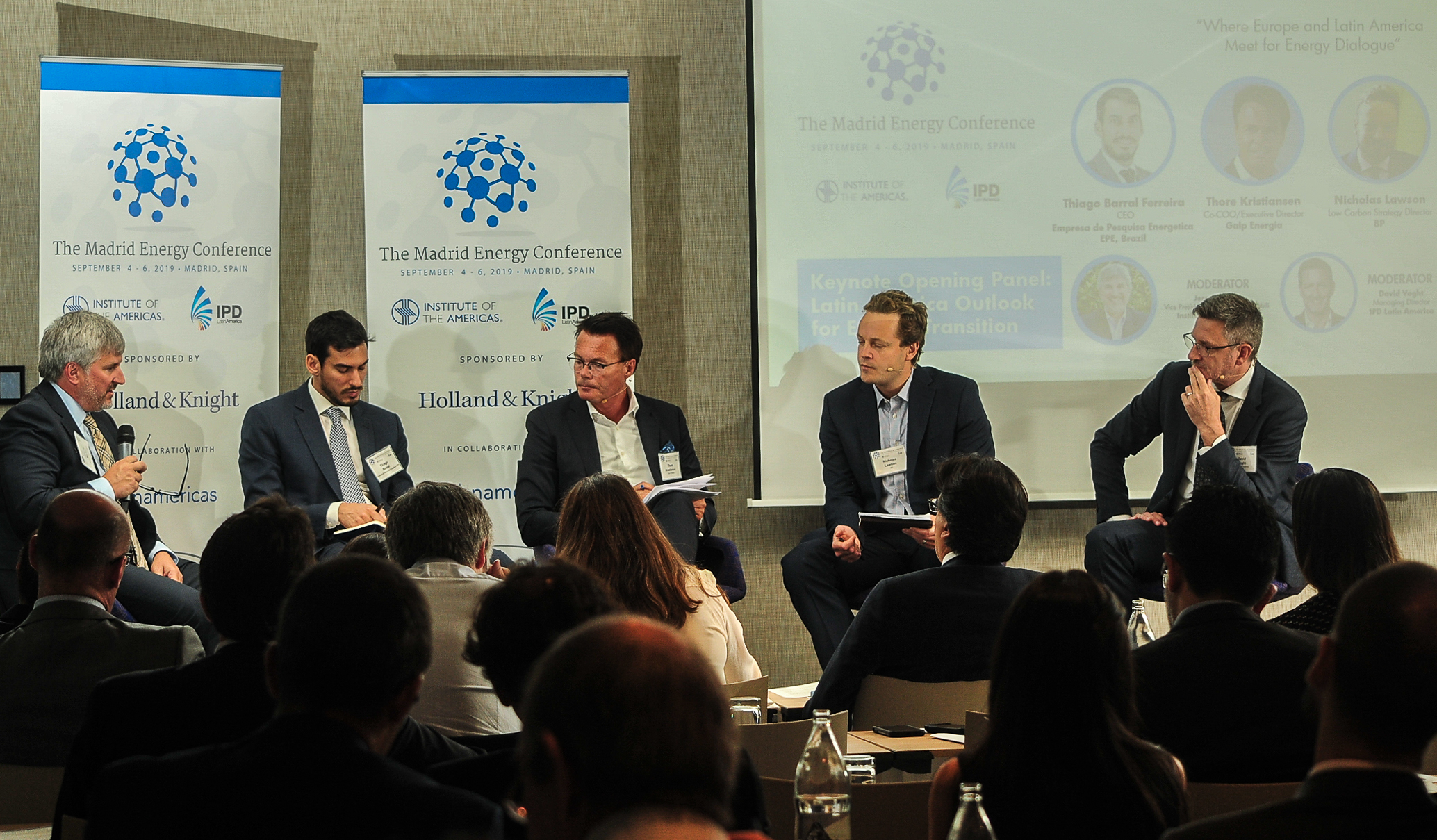 In a panel discussion at the conference, Thore Kristiansen, Co-COO and Executive Director for Galp Energia, noted that the world will need 40% more energy by 2050—all while having to reduce the carbon footprint. And the conflict in needs does not stop there. Latin American governments must also manage ever-growing urbanization and higher standards of living. Latin American countries, in particular, must determine how to align economic development objectives while cooperating towards a “just energy transition.” As OPEC General Legal Counsel Leonardo Sempertegui, who also addressed the conference, pointed out, “Economics are stronger than gravity.” The Latin American market illustrates this sentiment perfectly. Alvaro Villasante, Vice President for Power Generation for Grupo Energia Bogota pointed out that, “Cities often have to decide, not whether we have electric buses or normal buses, but rather if we will have buses at all. Social inclusion is important. Without energy for the people, there is no energy transition.” Latin America’s needs are clearly different from Europe’s. Spain’s Secretary of Energy, Jose Dominguez Abascal, also noted during the conference that a “just transition strategy” cannot leave people or regions behind. For Spain, that means that its coal strategy includes a 10-year phase-out plan. Because the markets have not been so gentle about making a transition, governments must focus on ways to ameliorate the social problems that arise in coal-dependent communities. And though energy access has improved significantly over the last decade, and, as Agustin Delgado, Chief Innovation and Sustainability Officer for Iberdrola, has noted, solar and wind combined are some of the most evenly and widely distributed systems in the world, there is a long way to go.

Grupo Energia Bogota’s Villasante also pointed out that most Latin American countries suffer from a fragility in the implementation of the rule of law. Because the law is often not clear, the investment risks are higher. That difference impacts decision-making. When it comes to decarbonization, the priorities in Latin America are different from those of Europe. A plan that works in Europe cannot simply be transplanted to Latin America.

So, while regional cooperation is a must for effective energy transition, it is still a contentious, thorny issue. As Ferreira explained, “Cooperation sets up a competition between technologies to decide which technologies can scale up.” Policies that foster efficiency, encourage innovation, invest in digitalization, and drive environmental and financial education are a must in this context. Ferreira also pointed out, “Regulation should open the space for innovation that is not competitive today.” The experts in attendance agreed that carbon capture mechanisms should be technology-neutral to allow multiple technologies to provide solutions, including demand response, pumped storage, and gas storage. It is still too early for regulators to “pick a winner.”

So where does that leave the traditional oil and gas producers? Some would argue that they are very well positioned, thank you. They can be—and already are in some cases—the ones to lead the charge. This position will require a sort of reinvention, though. Sempertegui stated that even his organization has changed to meet the needs of its members. OPEC members agree that “To provide the world with energy, we need all kinds of energy. OPEC represents the current interests of the countries and private companies that invest in those countries.” While OPEC considers itself a partner in decarbonization, it has no intention of eliminating any source of energy, as worldwide demand is expected to double over the next 30 years. In Brazil, where energy demand is also expected to double by 2050, the country is on track to become the world’s fifth largest gas producer. Brazil is also leading carbon capture initiatives at the seabed, according to Kristiansen. The country’s oil fields are carbon rich (70% of the gas stream), and the government has championed contractual obligations for oil and gas producers to spend 1% of investments on research and development—maybe to the point of overwhelming some R&D programs.

Individuated politics, policies, and economics in Latin America create the challenges that slow progress. But even with the volatility those variables create, the region is still well-worth investment. The players are diverse. So, too, are the solutions. They must be geared toward each country’s abilities, strengths, and limitations. Who better to lead the way on such an effort than the oil and gas companies that are already active in the region, and know the lay of the land?

The Madrid Energy Conference is an annual event hosted by IPD and the Institute of the Americas. Click here to sign up for notifications, information, and an invitation to the 2020 conference, slated for September 16-18.